Hilton Head Island is named after the English explorer Captain William F. Hilton, who in 1663 surveyed our island while sailing from the Caribbean island of Barbados. Captain Hilton was so impressed with the beauty of our island, with its "sweet water", and "clear sweet air", that he named it after himself! While the name did change over time, eventually the island became firmly known as "Hilton Head Island."

This was not the first time humans had visited Hilton Head Island though. Within Sea Pines resort are the remains of a native american shell ring dating back some 4,000 years! Along with Captain Hilton exploring for the English, the Spanish, French, and Scots all sent expeditions to the area as well. During the 1700s, the island saw small skirmishes during the U.S. War of Independence, and the establishment of several plantations on the island. Ruins of the Stoney-Banard Planation (pictured below) can still be viewed today! 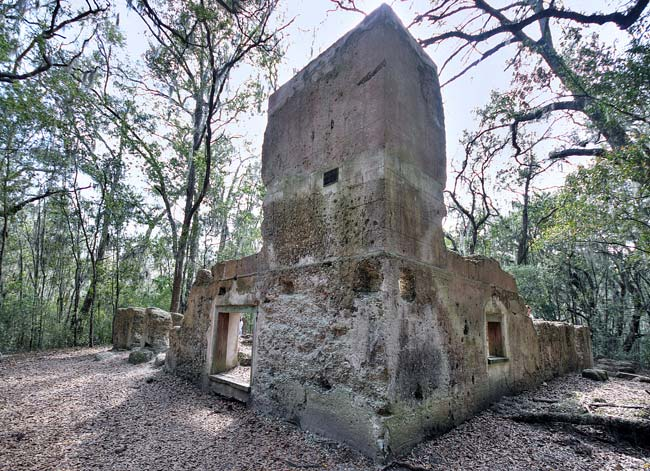 Hilton Head also saw prominance during the civil war. In late 1861, the Union launched a campaign to take the island, bombarding Fort Walker on the northern tip of the island (pictured below) and landing over 12,000 troops on the island.

After the Union took the island, Hilton Head became the headquarters for the union blockade of the Confederacy. An army hospital was built, along with a small town to sustain the garrison. Freed and runway slaves found their way to the island, and set up the town of Mitchellville nearby to the Union forts.

By the 1920s-30s, Mitchellville had dimished in size, with only a few buildings still standing to be preserved through today. The island population had swelled to thousands during the height of the union occupation, but by then, it was just a few hundred. This small population of former slaves were among the Gullah of the lowcountry whose culture still lives on around the lowcountry today!

In the 1950s, the first bridge to Hilton Head was built. Developer Charles Fraser visited the island, and was so inspired by the natural beauty of our island that he developed the Sea Pines Resort, our island's first resort community. Today the strict guidelines employed by Charles Fraser in respect to our island's natural environment have been both admired and nationally recognized.

Today Hilton Head Island is best known for its 12 miles of beautiful beaches. Our island is the 2nd largest barrier island on the East Coast and is home to a variety of wildlife. On any given day your family may encounter a bottlenose dolphin, a snowy egret, a blue heron, white tailed deer, an occasional manatee or a lazy alligator basking in the sun.

For more information on the history of Hilton Head, check out: http://www.hiltonheadisland.org/

Come check out the unique specials that we offer!

ON HILTON HEAD ISLAND, SC, THERE IS SO MUCH TO DO!

ON HILTON HEAD ISLAND, SC, THERE IS SO MUCH TO DO!

Hilton Head offers the perfect blend of beaches, marshes, plenty of trees, and plenty of sun!

OWN A VACATION HOME? THINKING ABOUT BUYING ONE?

OWN A VACATION HOME? THINKING ABOUT BUYING ONE?

If you or someone you know has a fabulous Hilton Head vacation rental property, you will want to ...

WE ARE SOCIAL AND WE WANT TO HEAR FROM YOU.

WE ARE SOCIAL AND WE WANT TO HEAR FROM YOU.

LEARN ABOUT WHERE WE LIVE

LEARN ABOUT WHERE WE LIVE

Hilton Head Island has a long, rich history, both natural and man-made!